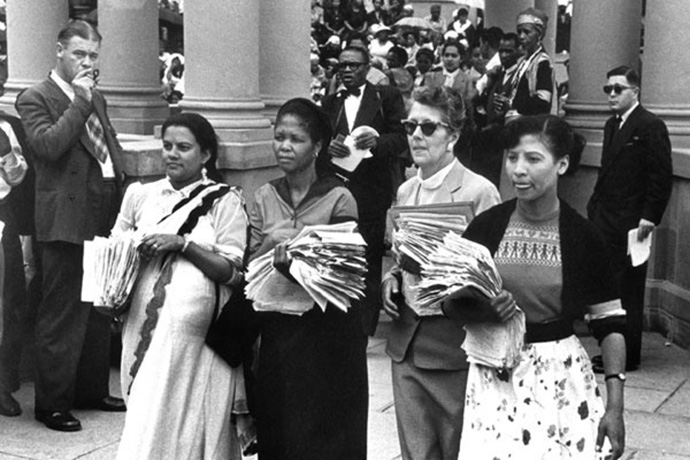 National Women’s Day has nothing to do with honouring women simply because they are female. Rather, it is about celebrating the bravery of 20 000 South African women who challenged the stereotype that they are politically incompetent and immature citizens who belong in the kitchen.

In 1956, when the then apartheid government proposed amendments to the Urban Areas Act that aimed to tighten the pass laws which limited the movement of black women in urban areas, the Federation of South African Women decided it had had enough. The decision was made to go to Pretoria and protest against the oppressive legislation.

On 9 August thousands of women from all over South Africa, some as far afield as Cape Town and Port Elizabeth, arrived in Pretoria. All processions in the city had been banned on that day, so the women walked in twos and threes toward the Union Buildings, some carrying babies on their backs. As a multiracial group they made a colourful spectacle, dressed in green and black blouses, brilliant saris and ochre robes.

The women walked in a determined, yet orderly manner. Their leaders, Helen Joseph, Rahima Moosa, Sophie Williams and Lilian Ngoyi carried bundles of petitions containing more than 100 000 signatures supporting their issue. They intended to hand these over the to the prime minister, JG Strijdom.

When they arrived at his office, neither the prime minister nor his senior staff were there to meet them.

The women placed the signed petitions outside Strijdom’s office door. At Lilian Ngoyi’s suggestion, they stood in complete silence for a full half hour. The petitions were eventually accepted by Strijdom’s secretary.

The women then sang a protest song that had been composed especially for the occasion. Wathint’Abafazi Wathint’imbokodo, which means “you strike a woman you strike a rock”, has come to represent women’s courage and strength in South Africa.

In 1995, soon after South Africa’s change to democracy, 9 August was declared a national holiday as a tribute to the many women who risked arrest, detention and banning for a free South Africa.